Brent Alford was elected president in 2019, having held the role of secretary for the previous two years. He joined BIM in 2009.


In taking on the role of president, Brent states he wants to see a bigger and stronger BIM…”an organisation that is sustainable and truly offers something to all our members. Self-advocacy and connection are what we do. We want to make it real for a range of people, not just committees. We are offering people with a brain injury a range of supports like our coffee catch-ups and peer support groups that connect people with each other”. His message to BIM members is “Continue to be the self-advocates I know you all are!”

Since his accident in September 2006, Brent has embarked on a career as a motivational speaker, chalking up some 600 talks to young people and adults. His regular gigs include the Royal Melbourne Hospital and a number of schools. Drawing on his own lived experience of brain injury, his theme is ‘making smarter and better life choices’. Brent’s website, http://brentalford.com, talks in detail about his accident and his journey since. He also volunteers with the recreation team at the Portsea Camp, commencing with a university placement pre-injury in 2003 and then every year since 2009, 4 camps a year with up to 300 kids per camp.

True to his word, Brent not only hopes others can benefit from the lessons he learnt, but he is passionate about his own health and physical fitness. He is pursuing a goal of becoming an elite athlete, competing in the Australian Indoor Rowing Championships in the PR3. A great fan of goal setting, Brent says it is all about self-improvement and beating his own goals, though he did come 2nd in the 2019 and 3rd in 2020!
Email Brent

Colin has been involved in BIM for a number of years. He manages the BIM Facebook page and website and had been a Committee of Management member before stepping into the position of Vice Chair in 2020.

With a passion for helping people, Colin had been working in the Not-For-Profit (NFP) sector for 5 years before an accident in 2005 which resulted in a TBI. He has been volunteering with many other NFP’s for the last 12 years. He has also been studying long and hard and recently graduated with a Graduate Certificate of Disability and Inclusion from Deakin University in February 2020. He is now studying a Masters in Disability and Inclusion.

Colin’s hopes for BIM are that it grows as an organisation can support more people. His personal interests include reading and golf.
Email Colin 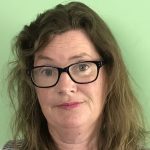 Nia has been a member of BIM since 2019. She was re-elected as Secretary at the 2021 AGM and also holds the position of SARU/BIM rep. In her role as SARU/BIM rep she keeps both organisations up to date with the latest events and information that concern BIM.

The peer support that BIM delivers is something that Nia is really excited about. She says, “I know how important the support of those with a lived experience can be to someone who feels isolated and/or suddenly coming to terms with a completely new way of living. I hope it makes a difference to many members.”

Thirty-two years ago, Nia was involved in a car accident. Initially she lost her speech and couldn’t move her right side.

A few years after her accident, Nia did a BA and followed that with a Master of Library and Information Studies. She has held many voluntary positions over the years and is now a full-time mother.

Nia lives with her husband, two daughters, stepson and a cat.

Roger has been the Treasurer at BIM since November 2018. He has a Master of Business Administration Degree and a background with ANZ Bank (Senior Manager, Financial Planning Operations) followed by Industry Super (National Manager, Operations) and finally Australian Super (Executive Coach).

Nearly 11 years ago, Roger’s life dramatically changed when he had a motorcycle accident involving a kangaroo. Before his accident, he had been in charge of billions of dollars and over 1,000 staff. He says his career came first and his family second. But post-accident he lost his job because the company no longer trusted him with so much responsibility. He also quickly realised how important his family was.

Apart from volunteering his time at BIM, Roger volunteers for Road Trauma Support Services Victoria. He speaks to people who have been ordered by the courts to attend education on road safety and about how choices can affect your future.

Roger says, “I’d never heard of ABI before my accident. My hope for BIM is that it can become an access portal for people living with ABI so they can obtain helpful information. One of the most helpful things for me has been finding out about the Travel Access Pass through Metro so I don’t have to worry about managing a MYKI card.”

Flying model aeroplanes is Roger’s favourite hobby. He takes each day as it comes. “I don’t think about tomorrow or I get the ‘sads’, but I think about today and set myself goals to achieve each day.
Email Roger

Anat has been involved with BIM for about 5 years. She is a member of the Committee of Management, attends a peer support group and is a regular at the weekly online coffee mornings. Anat says she loves being part of BIM because she gets to spend time with like-minded people who have all been through a similar life-changing experience.

At the age of 24, Anat had a car accident and lost many of her abilities. She says, “I often heard that many people felt sorry for me. I’m not entirely sure whether this is a good or bad quality, but I’m still often quite pleased with my life, even with my drastically-reduced abilities!”

Five years ago, Anat started up a local social disability group through the Glen Eira council. She has also done voluntary work as a teaching assistant in a primary school, sometimes helps out therapists at the Epworth and regularly makes presentations, both to senior & primary school students. Anat says, “I majorly enjoy speaking to educate people about brain injury. This is one of my passions in life, since I really enjoy telling people about my situation and what I do nowadays.”

Anat speaks many languages and her personal interests include keeping fit and writing, which she enjoys doing even more since her accident!

Helen has had a brain injury her whole life but wasn’t diagnosed until she was 34. Some left-sided weakness led to a diagnosis of AVM (Arterio Venous Malformation). She had radiation treatment to fix it, but the fallout was stroke-like symptoms. For the last 13 years, she’s been making her way as a single barren spinster and advocating for people with brain injury and disabilities.

Helen communicates to the world through her blog.
You can follow her at hellonwheelslifeonehanded

Kelvin has been a long-term member of BIM – so long he can’t remember when he started at BIM! He has also been an active committee member for many years.

His hope is that many more people will become involved and that BIM can continue to reach out to more people with brain injury. He says, “We have done a lot of good things but there’s always more we can do.”

Kelvin’s brain injury occurred when he had a stroke in 2000.

One of his main passions in life is food. When asked what type of food his reply was, “I’m just interested in food – anything good, of which there is a whole lot.”

Lauren has been at BIM since October 2019. She supports the Executive and Committee of Management and is the main point of contact for the BIM office in Flinders Lane. She is very welcoming of people calling, emailing, or dropping in to say hi.

Teaching and working in Community Development has formed most of Lauren’s work history. She is passionate about BIM being run by people with brain injury, for people with brain injury. She says, “BIM operates with the Community Development principles and practices of equity, empowerment, human rights, participation, peer support and self-advocacy. It is my privilege to assist the Committee of Management at BIM to make decisions about what happens at BIM, and how the interests of BIM members are best served. Their hard work inspires me.”

Lauren says she is lucky to live near the beach with her rescue cat, Minee.
Email Lauren

Most of Peter's working life has been in the disability sector - working for NGOs, and the State and Federal governments. He began work in the area in 1977, and has worked in advocacy, accomodation and day services, and service redesign. Peter spent over 10 years working to improve outcomes for people with disability in the Victorian correctional system, including research on the prevalence of people with ABI in prison.

The values that underpin Peter’s work are a deeply held commitment to social justice, and a fairer, more equitable society. His personal interests revolve around a love of cycling – both getting out there and watching it. The three weeks of the Tour de France is his favourite time of year!
Email Peter

With a background in finance, Fraser is a qualified ACCA accountant and has worked in various finance roles over the years. He enjoys contributing to the Not-For- Profit sector and is also Treasurer for Prace, a school in Reservoir.

In his spare time, Fraser likes to perform on stage in theatrical plays and enjoys films and reading. Fraser believes he is lucky to work with such great volunteers and staff at BIM.
Email Fraser

Sonia joined BIM in November 2020 amid a haze of Covid. She has worked in the health and disability industry for the past ten years. After her diagnosis of Multiple Sclerosis (MS) in 2002, she made it her mission to give others the support she did not receive about social inclusion, employment support and disability empowerment.

Sonia has educated Victoria Police and the Department of Transport on accessibility and the Royal Melbourne Hospital on patient safety. She has recorded educational videos for MS Australia addressing issues faced by those diagnosed. She voiced an animation about MS that has been viewed by over 500,000 people worldwide and recorded a training video for the NDIA on what to expect from a person with MS.

Sonia is also employed as an MS Consultant with Novartis Pharmaceuticals providing insight on the patient experience of those with MS. She was previously employed at Brainlink Services in various roles including the coordinator and facilitator of Brainlink’s LifeMoves Peer Support Group. Facilitatinag these groups broadened her awareness of the challenges and discriminations faced by others with different ABI’s to her own. Sonia is excited about bringing her experience and knowledge to BIM as a Peer Project Coordinator.
Email Sonia

Fiona started working as a Peer Project Worker at BIM in 2019.

Fiona loves getting out and about with her guide dog. She enjoys going to cafes, the gym and theatre performances. She is a member of a book group. Fiona has studied Business and Financial Counselling and volunteers as a financial coach.
Email Fiona

Yannick has been with BIM since August 2019. He was involved in the previous ILC project as a Project Peer Worker and now, in the new project, as the Peer Digital Coordinator.

As part of the project team, Yannick wants to succeed in his role for BIM and leave a foundation for members to be proud of and build on.

Yannick is one of three people with a brain injury on the project team. Due to a motorbike accident in 2010, he received a mild ABI.
Email Yannick

She works alongside the Peer Coordinators, supporting and empowering them to fulfil BIM’s vision and purpose.

As well as working at BIM, Sally has worked in the Education and Wellbeing sectors, including working with staff and students in Special Development Schools across Melbourne as a Casual Relief Teacher.