Living With An Acquired Brain Injury
By Ann Hutchinson 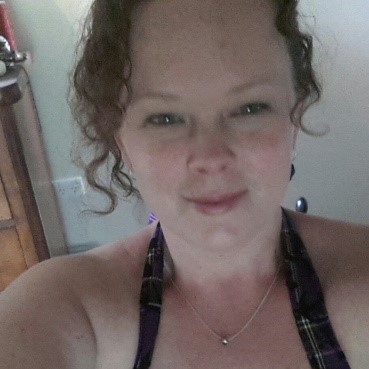 80% of people with disabilities, have acquired them over their lives. Be that through injury or illness.

I look normal and, if I concentrate really hard, I even sound normal. But, I have a condition you can’t see, I have an Acquired Brain Injury, an ABI.  I’m the person who frustrates you in a supermarket queue, the person looking like a stunned mullet in a busy train station or shopping centre. Behind my ‘resting bitch’ face, I’m completely freaking out.

I grew up in Nar Nar Goon and until May 2011, I was a normal, even boring, 30-year-old retail manager. I ran a tight ship and I was starting to climb the management ladder. Every few months I seemed to have a new responsibility and I was good at my job and I loved that feeling.

In May 2011, I started to get sick. Random stuff like chronic sinus infections, hives, headaches and lethargy. I also had an intense bout of vertigo, as a result, my work performance slipped. I thought I was just sick of my job. Management must’ve thought the same thing because by August that year, I had been retrenched.

In December, 2011, four days before Christmas, I had my first stroke and my world got turned upside down.

Over the next 3 and a half months, I went from Casey to Monash to Casey to Dandenong and back to Monash.  I had another stroke and multiple organ failure, including cardio myopathy. Things did get a little bit scary for a while.

It was during my stay at Monash’s Cardiac Care Unit that I was finally diagnosed with Catastrophic Antiphospholipid Syndrome. It’s a condition similar to Lupus that causes your immune system to attack healthy cells, it also causes clots.

I had a further 3 weeks in Casey rehab where I started to try and wrap my head around things. I quickly realized that my new moto had to be ‘Fake it till you make it’. The situation I had found myself in was so overwhelming that I just had to put on a brave face and focus on the things I COULD do, e.g. Learning to shower, eat and even walk unaided.

It was also in rehab that I was confronted by the fact that not everyone is as fortunate as me. I was in a ward with three ladies who had had strokes and were in their 80s and 90s, one of whom had dementia. They all had family, some more than others, but they didn’t really have much say in what was happening to them. Even when they did speak up, they were dismissed and not listened to. This is what sparked my interest in speaking up for people, but of course, at the time, I didn’t know what that would look like.

Australia’s health system saved my life but, it’s very much catch and release. I could kind of walk and I could kind of talk so, I was well enough to be released into the wild.

I was a basket case, it was about 12 months before I did anything but go to appointments and cry. Without my family and friends, I would’ve just curled up in a ball and given up. I had completely lost my sense of self in a fog of medical jargon, pain, uncertainty and a brain that just couldn’t keep up.

What snapped me out of it, and this is going to sound strange but, it was my vision impairment. I was linked in with Guide Dogs Victoria. They have an ABI department, they came out to my home in Nar Nar Goon in country Victoria and so began my baby steps back to independence. I learned how to cross roads without getting skittled, how to use my white cane without tripping myself over. Best part of my training for a public transport snob like me was learning how to travel safely and of course, the dreaded Myki system. I could finally get out of the house by myself! Hooray!

Getting back into the world was confronting for me but I knew that I couldn’t stay locked away, living in my head, dwelling on the enormity of what I had gone through. It wasn’t doing me any good.

With the support of Monash Health’s ABI department, I decided to try to get back to studying. I have since done 2 courses with Yoorella in Flinders Street, Melbourne.

The first was ‘Speaking Up’ for yourself and others. Because I had never much to do with people with disabilities, my first couple of classes were quite confronting for me. It was in this class however that I decided for sure that I would like to look into advocacy as a potential new employment direction for myself. I found the instructor, Jeanette very inspiring and I learned a lot. I’ve always been quite an outspoken person but, my brain injury effected my speech and also my ability to recognise the fine line between assertiveness and aggression. I also enjoyed the company of the other students more than I expected to. When I began, I think I may have been a little naïve about disability. I don’t know what I expected but, that course really opened my eyes.

At the same time as I was doing the ‘Speaking up’ course, I started attending meetings with BIM, (Brain Injury Matters). They are an ABI self-advocacy group. They were such a great find, finding a group of people living with the same limitations as me, (fatigue, changed cognition, balance and memory problems) and thriving, was a great relief and lit a fire under me. Raising awareness of ABI became important to me. I was completely unaware of ABI until I had one.  My next step was joining Speakers Bank, I was deathly afraid of public speaking previously but, having a brain injury has made me pretty fearless. Got to be some perks I suppose.  So far, I have only done 3 presentations but, they have well received.

The second course I did with Yoorella was ‘My Life Keys’ with Valid. Victorian Advocates League for Individuals with Disabilities. This course was amazing, it was structured in a way that made sure that everyone had an opportunity to speak and be heard. Hearing about some of the other students’ experiences and sharing some of my own, we were taught about our rights and how to go about speaking up in a respectful manner but also, that we are more capable than most people, even ourselves, believe.

It was around this time, that I ran into Marie Brown and a couple of the other oppy ladies down the street and mentioned that I was thinking about volunteering. Next thing I knew I was in the op shop, talking to Jude.

In September 2014, I did my first shift at the Posh Op Shop.

This turned out to be the most amazing thing. Everyone I worked with was so patient with me and built me up despite the fact that my speech was weird and I was pretty crazy. I still feel guilty about sending Helen’s coffee flying after opening the till into it.

Everyone was welcoming and kind. No-one ever doubted that I was capable. People helped when I needed them to (Joy usually had to do the math) and helped me rebuild my confidence. That time was really important to me and I want everyone to know how much I appreciate it.

In my 18 months at the oppy, I had remembered how to put on my retail face and talk to people. It gave me the confidence to launch into my next adventure.

Completing the two courses with Yoorella gave me the confidence to have a go at mainstream education. I went on to study and complete my Certificate 4 in Disability. I did my placement with Valid (who ran My Life Keys) and am now working for them in community development. I’m also doing project work for BIM, improving their website and social media platforms.

Going into advocacy was important to me because I found my transition from rehab to ‘real life’ extremely difficult. There is very little support for people with ABI and their families and what is out there is not easily accessible. Having a brain injury isn’t something you can fix with a good night’s sleep or a nice cup of tea. It is something that effects every aspect of your day. It changes how you look at people and yourself and it’s quite terrifying.

My ultimate goal is to offer some sort of early intervention, a soft landing, to people with ABI. I am not sure what that will look like yet, but it will be better than the vacuum that is on offer at the moment.

In the meantime, I’m just doing the best I can, piecing together a new life for myself and trying to improve the lives of people with disabilities, Invisible or otherwise.