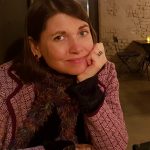 I have a story. It is a slow story about a condition and the body it decided to inhabit. The story is slow because that’s how conditions like mine work. I use the word ‘work’ because that is what it has done to my brain and my body. It has been worked on, like an artist works on a piece of clay. This artist was not hired; it arrived one day when I was sixteen years old to begin its slow and quite untalented profession of Multiple Sclerosis (MS).

MS can arrive surreptitiously, or it can arrive like a marching band. Mine was the former, creating strange physical anomalies that sounded dishonest. I lived with these symptoms through the end of high school and my four years at University. I had seen doctors sporadically when the symptoms became too bizarre and all I was told was that my lifestyle was the cause. I was studying a double major of Media, Communication & Cultural Studies and Theatre & Drama studies so I was terribly busy. The words ‘stress’ and ‘not enough sleep’ were thrown at me by doctors when I saw them about tingling skin and spots in my vision.

I remember the lead up to diagnosis. The symptoms were getting stronger and weirder. The pins and needles I woke with in the morning lasted longer than ten or fifteen minutes and the blind spots in my eyes were bigger. I was randomly losing balance more often, even losing the control of my limbs. All of these I learned were caused by MS after I was diagnosed because retrospect is an amazing thing. That is how I know my MS started when I was sixteen years old, when I woke one day with no feeling down one side of my body. I lived with this unknown and awful artist for five years before the MS marching band made its entrance when I was twenty-one; the day I woke almost completely blind.

At the time of diagnosis, I thought my life was over. All I knew about MS was that it was a life sentence of physical degradation and mental collapse. For a time, this was true. Prior to diagnosis I had been accepted into an honours course at university, which I had started, but was excluded from because of my disability. I was also fired from my job. I tried my hardest to keep up with my acting but even that was hampered by MS complications. I was in and out of hospital feeling like a scientific experiment. Treatments either wouldn’t work or worked for a short while before deciding otherwise. I was depressed as I was doing one theatre show per year if I was lucky. That was hard for many reasons, the main one being that I had a life plan when I graduated from Uni and that plan was drifting away from me at an alarming rate. I wanted to be a researcher for the ABC or SBS by day and a theatre actor by night. I had made quite a name for myself as an actor in Perth to the point of getting recognized by strangers when I walked through the city. This diagnosis forced me to reimagine the identity I had forged for myself and begun living. I was now tired and withdrawn because of an external medical hitchhiker with a long-term lease who refused to respond to treatment. This describes the first three years of my new MS life.

A thing about MS that took me a while to learn was that it is an acquired brain injury. Put simply, it is a progressive autoimmune condition. It arrives like an uninvited party guest, causing the immune system to get confused and attack the brain.  People with MS don’t have the privilege of asking the annoying guest to leave as it is incurable. The M in the acronym stands for multiple and the S is for sclerosis. When the immune system attacks the brain, it causes little inflammations, or scleroses, which interrupt the messages that flow through the brain’s “power cords”. This doesn’t sound too tough, but the overall effect of the condition is fatigue, pain, cognitive and mood changes such as depression, bladder and bowel problems, sexual problems, visual changes, and muscular failure. I don’t have all of these, but I have enough.

Now, I know this sounds like a whinge-fest, but it does have a happy ending.

There was so much fear for me at the start, mostly because the start felt like it lasted about ten years. There was slow progression, then improvement. There were medication choices to find the perfect balance of injectables and pills. There was frustration that my body was not listening to my brain, that my brain was doing this to my body, and that the ultimate culprit was an immune system I could not see but knew was there from its betrayal. There was information overload and new terms like ‘hemiplegia’ that make you sound clever for a time then just got boring. There was anger, frustration, elation when I found I could do a task I had lost and exhaustion when everything took extra time to accomplish. There was losing the ability to walk, talk and use my right hand before therapy made improvements. I am so thankful for my theatre and drama training where I learned to fall without injury. There was also love and support. I married the boyfriend I had before diagnosis. I told him he was insane for asking me, but it happened and we are still together. The marching band didn’t scare him away.

It was around the six or seven year mark that things started looking up. I had changed medication to one that made me plateau, which was nice as I was tiring of the constant changes. I found myself a job as an actor training police officers and prison guards and my lifestyle choices meant that I was healthier and walking better. This remained constant for a few years which some might say is boring but when you have MS, stability is the key to happiness. Then the spontaneous move from Perth to Melbourne, triggered by unemployment and a disinterest to work in mining, made everything step up once again. While the stress of the act affected my health, I found a new community that embraced disability and difference with open arms.

I feel strange saying that MS has now given so much when the early years revolved around loss. Being in Melbourne has allowed me the self-title of ‘professionally disabled’ as everything in my life revolves around ABI and disability in some way. I am even able to use the University degree I thought would disappear into irrelevance. I originally made contacts through volunteering with many organisations which gave oodles of experience and a sturdy professional foundation. I now promote, organise, and run support groups for those with ABI at Brain Injury Matters. I have never worked so much in the performance sphere as Melbourne theatre welcomes inclusivity. I am gainfully employed which is a prospect I only dreamed about. Yes, an ABI is life changing but it does not have to be life ending. There is irritation and joy, resentment and levity, anger, and laughter when I fall over. I have owned this artist called MS and made it work for me instead of on me.