Living with an Acquired Brain Injury
By Larissa MacFarlane 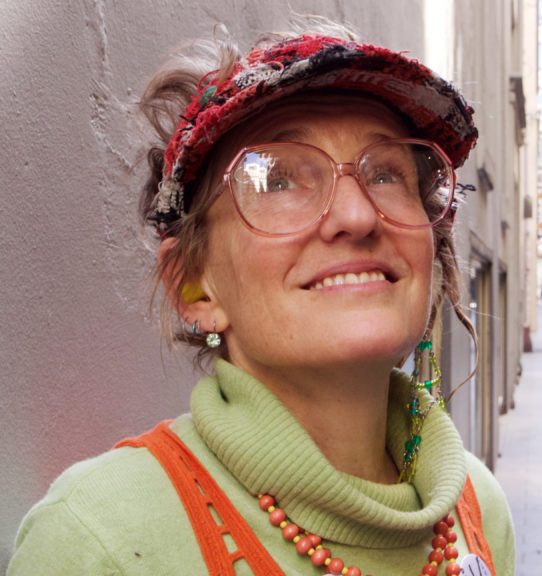 I didn’t always get paid much for my work, but I didn’t need much. I was part of a strong supportive community that valued collectivism over consumerism.

But one day, just like any other, in 1998, I was riding my bicycle across town, and I was hit by a ute. And my life was changed in momentous ways. My brain injury wasn’t initially diagnosed – I appeared to be fine and anyway there were broken bones to deal with. But as the days and weeks passed, I knew that there was something desperately wrong with me. I just couldn’t work out what it was. I never made it back to work or to study or even out of the house. When friends visited me, I couldn’t follow our conversations, but out of some misplaced sense of shame and fear, I pretended as best I could. I received a TV to help pass the time, but I struggled to understand any of it (except maybe the adds). I couldn’t read any of my beloved books, because the words didn’t make sense. All my records and CDs sounded distorted and I blamed the sound system. I couldn’t remember things that had only happened yesterday. (Although in the early years, I didn’t even realise all this, since I had already forgotten). And every small thing seemed to exhaust me beyond belief. To those friends that I did confide in, they kindly offered to take me to see a doctor. But then I couldn’t work out how to use the telephone to make an appointment, (not to mention that I had no idea how to wash the cups that the kindly friends had left behind!).

Eventually, I was diagnosed with a diffuse axonal brain injury – a type of ABI labelled as mild but that can still wreak havoc on your life. So six months after the accident I started attending daily outpatient rehabilitation at Bethesda hospital. That was a depressing time. Not only was it exhausting but no matter how hard I tried, I didn’t seem to improve. I was constantly confused and seemed to have little control over my emotions. And I felt there was a serious lack of empathy or respect for my situation or my opinions. Six months later, when I was discharged, I went straight back to being housebound.

But I was also lucky. A good friend moved in with me after my accident and became my carer. I lost a huge amount of weight (ABI has removed my appetite), and without her attempts to feed me, it could have been worse. I also had an amazing boyfriend that stuck by me…well, for about 18 months anyway.

Around 18 months after the accident, my friend/carer also had her own personal crisis and moved out of our house. I was then evicted for not paying the rent (since such tasks were still incomprehensible to me) and for the next year, I became technically homeless.

Eventually, I found a new home with a friend of a friend, in a new part of town, and my slow recovery began. It was a very sad and lonely time. I had lost contact with 95% of my friends. I had also now been diagnosed with chronic pain syndrome (after several operations), as well as a post-traumatic stress disorder. Things were very messy. It took another five long years of slow hard work and trying to stay alive before I felt like I could even consider that a future for this new me was possible. But during this time, I did make new friends amongst my new community of marginalised, homeless, mentally ill and disabled people. And I joined some support groups (and even started a few), all of which were helpful in small and big ways.

Today I still live with many issues that are the legacy of a brain injury. To name a few, I have chronic fatigue and episodic brain fogs. I live with daily pain and nausea, and I am very noise, light and touch-sensitive. I am still very emotionally labile and experience anxiety and depression. I am thankful for regaining much of my memory, and oddly, I don’t miss my previous photographic memory ability. But multitasking is still the skill I miss most. I also recognise that much of the struggle in my life is in resisting being defined as lesser by a society that insists that being different or sick is wrong. This discrimination has also meant that it has been more difficult for me to access the health care I need, as well as safe housing, education, employment and other things that most able bodied people (especially if they are also white, male, cisgendered and heterosexual) have access to.

But brain injury has also given me experiences, insights and even talents that I would never have had otherwise. Whilst I still grieve over the loss of music (it still sounds like distressing noise), I have now become a visual artist. The brain injury literally changed the way that I see the world, and after many years of practice, I am now a printmaker, street artist, and lead numerous community art projects. My art practice has also taught me skills to creative problem solve so many of the unique problems that we face as people with ABI and other disability, in an able-bodied world.

Along the way, I discovered movement as a way to manage my unruly body, and amongst other skills, I now do handstands on a daily basis! (The pre-ABI rather uncoordinated Larissa would be completely astounded by this fact.)
I have also become a disability activist, working within self-advocacy, peer support and disability-led groups, to be part of building a sustainable disability rights movement. Such collective communities can not only help heal our traumas but also give us tools and a voice to advocate for a more fair and just society.

In recent years, I have discovered the social model of disability, which challenges the dominant mindset that sees the bodies and minds of people with disability as inherently wrong. The social model, instead understands that disability is a normal natural part of the human experience, and as such is an experience that we can take pride in. It is not our bodies that are problems, but it is the physical and attitudinal structures of society that limit access for disabled people, that are the real problem.

In my 20th year with brain injury, I finally feel like I am coming into my ABI power. In 2018, I undertook a long-held ambition, leading 50 of my disabled friends to create a Disability Pride mural (which turns out to be Australia’s first!). It was a massive and difficult achievement. My journey with a brain injury has enabled me to discover a great secret – that disabled people (especially those with ABI), are some of the most amazing and interesting people on the planet. But because of society’s attitudes towards us, we can often experience great shame in our brain injuries. This is called internalised ableism. It is this that drives much of my artwork and activism – building a sense of culture and pride in our lived experience of disability and mental illness diagnoses, that can challenge this shame and stigma. The Disability Pride Mural Project is about creating public spaces for us to practice standing strong, to build our community and culture, and challenge the negative stereotypes.

This is just a snippet of 20 intense years of life following my ABI. A brain injury is for life, but with work, a brain injury can always improve. And a brain injury always makes life interesting, albeit sometimes a little bit too interesting. (But the alternatives might be boring and that would be well…boring.)

Ps. It took ten years, but I did finally get back in the saddle and have now resumed a love affair with my bicycle.