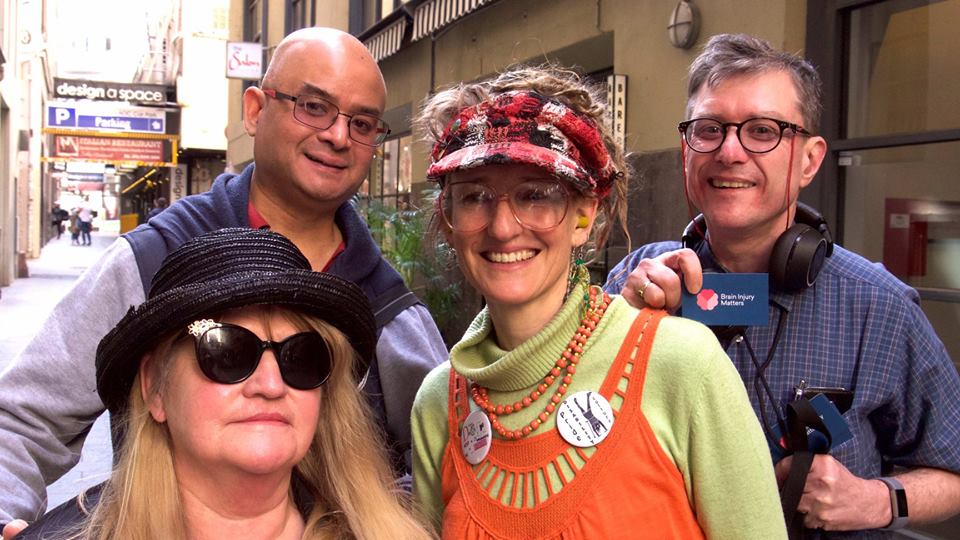 During the 2017-8 year the long time President of Brain Injury Matters (BIM) Peta Ferguson retired from the position and was replaced by Francesca Lee. It is fitting that we acknowledge the many years of commitment and work undertaken by Peta to build BIM as an organisation and to highlight the needs of people living with an acquired brain injury.

Peta leaves the organisation stronger and with an increased visibility both to government and the community of the issues facing people living with an acquired brain injury, their needs and the changes that need to take place to increase their inclusion and access to services.

BIM had another big year with some major developments

In July 2017 BIM formed a steering committee of eight members that would meet monthly to work towards relaunching the Brain Injury Matters website funded by DHHS. In October 2017 BIM employed Kayla Summers and Ann Hutchinson to support the project and to work with BIM to create an accessible Website that the work of Brain Injury Matters.

When this project started the website was not accessible and was not creating or encouraging new members for BIM, it also wasn’t currently showcasing all of the wonderful things that BIM is involved in and stands for.

The first task that we took on was to create a logo that represented who BIM is and what is important to them, with the support of the steering committee we employed Milk and Cookies a graphic design company to support us with this, we then went on to employ Clickify to build the structure of our new website.

An important component of the website was to explain what Brain Injury is and who are the members behind Brain Injury Matters. BIM worked with Angus Strachan from Angus Strachan Productions to create 25 videos, a mixture of personal stories and informative videos.

The website was launched on July 25th2018 in Docklands and was celebrated by many BIM members, self advocates, new members and service providers. This website will allow BIM to continue to grow and showcase all of the work they do.

Funding was received from DHHS to produce an ABI Wise app and work was begun on this project. This is very exciting ground breaking project and a fuller report is included later in this annual report.

Funding has been received to undertake a project in the Loddon Mallee region to reduce the social isolation of people living with an acquired brain injury by providing them with social media skills. This project will be implemented in the coming year.

Voice at the table and advocating for people living with an acquired brain injury:

BIM members co-facilitated the Voice at the Table training provided to people with ABI, as well the training provided to organisations and government departments. A number of BIM members also undertook Voice at the Table training and have been representing the views of BIM and people with an acquired brain injury (ABI) to boards and committees of organisations since then including the Cancer Council, TAC, Disability Services Commissioner, Melbourne University and VCOSS.

BIM members have been representing people living with an acquired brain injury on organisations in the disability sector including SARU, Victorian Self Advocacy Network and the NDIS working group.

Distribution of the Hitchhikers Guide to the Brain Maze

BIM took part in the Dangerous Deeds project as it travelled the state. This included the screening of our film, participation in the ‘White Night’ in Warrnambool and presented two ABI culture workshops in Moe and Warrnambool – this was a joint presentation with United Brains

BIM members participated in Australia’s first Disability Pride Mural in Footscray in November 2027. This project was initiated and bought to fruition by BIM member Larissa MacFarlane and is a creative way of bringing increased visibility to people living with an acquired brain injury

BIM continued its close working relationship and partnership with United Brains (UB). BIM continues to act as the legal auspice for UB and the two organisations continue to look for ways to work together for the betterment of the sector and people living with an acquired brain injury. BIM continues to work closely with other organisations including United Brains, SARU, Clickify, AMIDA, Bendigo Health, Disability Commissioners Office, DHHS, New Wave, All Abilities Advocacy SW Vic, stART , Wesabi, Melbourne City Council, VCOSS and The Transport Ombudsman.

BIM undertook an office revamp designed to both improve the working space and to create a better space for members use that encourages their increased engagement with BIM and increased social engagement and self advocacy.